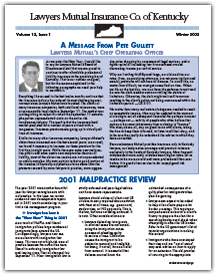 Disputes involving division of marital property in divorce actions continued to increase in 2001. As a result of the proliferation of double income families, retirement plans, and investment options it is easy to err when sorting out what belongs to whom. What follows is a recap of recent decisions illustrating the problem: